All the events and characters are almost fictional. Any resemblance to any person, living or dead, is an irony of fate, and purely coincidental, since I didn’t ask you to read this. 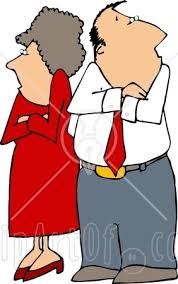 Every one likes poking their noses, long or flat, into others’ business, especially in others’ love lives. So here goes one such. A friend told his girlfriend, “Do you know (let’s call her) G never asks for anything from (let’s call him) M. And look at you, you are always ‘I want this’, ‘I want that’… you have a lot left to learn, you know!” His girlfriend retorted, “Did you know, why she never asks for anything from your friend. That’s because, he spends thousands on her just like that! She doesn’t even have to ask! You have a lot left to learn… you understand, mister?!!…” (buzzzz)
M was amused and surprised. He told G what his friend had told him (Yaar! What have you done? I am finished being compared to you raat-din/day and night), and asked her, “When did I start earning so much that I’ve started spending thousands? What did you tell her?” G smile mischievously and said, “I lied. Your friend thought it was very macho to praise himself to his girlfriend, in front of yours, by telling her how better he is than you. So, I thought let’s see how better his balls are. Now it seems his balls will have to go on exile. Or his bank balance will!
*
Four friends were having an argument- let’s name them- Ravi (another lawyer), his wife, Ria, M and G (the leading couple). The topic of argument for the last 20 minutes: the age-old feud between woman and man. Ravi was very heated up and practically shouted at Ria, “It is  the duty of the woman to care of her husband and the household, and not earning money. The place of a woman is at home.” Ria was incensed. “@#^$#%^^!@#$!!”
M was keeping mighty quiet. Ravi found he was going to be outranked, outclassed and outdone by the women, he turned to M, “Arre, say something yaar!” M quietly replied, “I think women can do anything. After all, it is only a woman who can hold a family together, the most important of all things.” G was ecstatic, she smiled triumphantly at Ravi, who was dumbfounded, and softly smiled at M. After the ladies had left, Ravi turned to M, “What did you just do? You were supposed to be on my side?!” M said, “I was on your side. I said what you did, only, to use your law jargon, I re-phrased the statement. I just used the tact you use in courtrooms, and I’ll be the one sleeping in my own bed tonight and you, in the couch!”
*


She knew he was seeing some other girl. Actually she was sure of it. She planned to catch him unaware. She went to his house and started banging on his door, shouting, “Come on Ratul, I know you are in there… Open up! It’s going to be a lot worse if you don’t.” She heard a scuffle, a couple of curses and a thud. She banged even harder. Ratul opened the door, with his shirt half-buttoned, hair messed, but grinning broadly. She stalked inside and asked in a deceptive calm, “Where is the bitch?”. Ratul smiled, “Oh, you know about her? I wanted to surprise you! But don’t worry, all my friends already like her. She takes a bit too much of my time but I’m sure you will approve of her, and fall in love with her, just like I did.” She was incredulous. She decided to take matters in her own hands and stalked to his room and threw the door open, and stared. It was a puppy. “Isn’t she pretty”, Ratul intoned.
[Later, much later, Ratul sent a text message: Sry i had 2 rush u out d bak door but my mom came home early. C ya tmrw, tc! 🙂]

We, cousins and friends, were having a gala time, chatting and joking, at my cousin’s place. Suddenly, we heard my aunt shouting at my uncle in their bedroom, “Drop your pants! Drop your pants, I say!… Don’t waste my time, do it fast! I have many chores to do after this!” There was a sudden lull in our conversation, and then we all started talking loudly, all at the same time, trying to pretend we couldn’t hear the shrill voice that was absolutely making our ears throb. Later we learned, the doctor had prescribed compresses twice daily for the huge, painful boil on uncle’s thigh.

N.B. Did your almost overwhelming response to my last set of observations made me do a re-take? Not at all. I just found these purging. And then, whatever number of times you smile, there’s always room for more. Keep that Smile!


Again, these may be true events. I have no idea.

An Artist in Science: A Misfit 'cause I choose to be one. "Whenever you find that you are on the side of the majority, it is time to reform" And a Maverick, because, I'm... umm... brilliant?
View all posts by Guria →
This entry was posted in Laughs, Observer. Bookmark the permalink.