Posted on July 2, 2014 by Guria
It’s been a while I have been ensconced in the Americas, but I haven’t still transitioned completely.  For instance, I am yet to comfortably lapse into the word “soccer”, it is still “football” for me in a country where that word means an entire different ball game. And that sport, that I call football, still happens to be the greatest game on earth for me.
Four years ago, I was preparing for my journey over the Atlantic while watching the World Cup, reveling in the joys and despairs of the game with my family, in the middle of the night. Today, the timings of the live matches are more convenient but I miss the furor of my city, the madness of my co-enthusiasts. (This is one of those rare moments where I feel I need to thank Facebook in keeping me connected with the revelers scattered all over the planet, albeit sometimes at the expense of the uninterested getting spammed, to discuss, argue and celebrate) 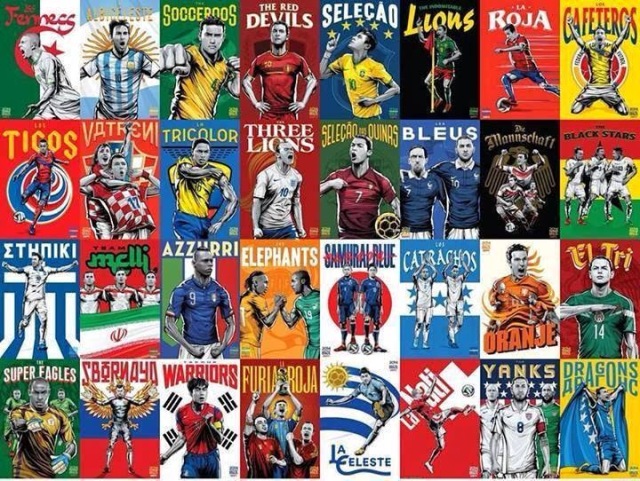 The thing about football/soccer, it is not about individuals, it is about a nation, any nation, and them coming together with all others on the greatest platform that is there. There are 193 countries that are the members of the United Nations (UN), and the International Federation of Association Football, better known as FIFA, has 209 countries today. I have learned names of new countries from this sport, and I have learned of their plights, their everyday struggles and of their prides from this sport. This is one sport where there is no inequality, no judgement but the spirit and the skill of the game. I don’t care if the origins of the sport is European, today the sport is owned by the world.
Coming from a country where cricket is touted as the best sport, and a country that is divided (as it is united) by barriers of regionalism (or languages), I cannot emphasize enough on the beauty of this sport that cannot stand simply on the shoulders of one individual, albeit a great one. Messi cannot be the glorious Messi we know all by himself, if there were no team members that set him up, or let him be at his best. It’s not often that one player can shoulder a whole team forward. Football can be played by one great player, but it is beautiful when played by eleven not-so-great individuals playing to and playing for each others’ strengths, and playing together. To me it’s a lesson in basic humanity, the strength in numbers, the strength in unity.
But even without becoming philosophical about the sport, it is wondrous that how simple the game actually is. With only 17 major rules, it is one of the easiest sports to follow, even if it is not the easiest to play. It is indeed, as simple as the metric system. The game is addictive. Like every other sport, it has its boring matches, but it can be fast-paced, exciting and thrilling as well. Yes, there are matches which are scoreless, but the score doesn’t always say the whole story. Spouting philosophy again, but it’s always about the journey, never only the destination.
Maybe girls and boys can play the sport together, it only helps to bring forth the divides that this sport has managed to transcend. This sport is not played for ‘justice’, but for equality, for amicability. Of course, there will always be the joy of winning, the urge for winning but it won’t take away the glory of playing together without any barriers. And then there are the upsets, Senegal beating France (2002), Ghana upsetting the Americans (2010) and scaring the Germans (2014), Costa Rica emerging victorious after being written off (2014), Brazil/Argentina, two impoverished states, being the fore-runners.
Again, I am from Calcutta/Kolkata. I inherited the love for football by tradition, and maybe took that love to the more exciting level of obsession. But there are worse things to learn, or to be obsessed about. With the World Cup 2014 being held in Brazil now, and being in America where people are beginning to get interested in the sport, not least due to their own team doing marvelously, I find it strange that some sects find it difficult to participate in the global joy of the game, only because it’s not just theirs.

On a different note, one of my hopes (I have very simple wants in life!) is that India will play the World Cup in my lifetime, or at least have a team worthy of competing at the international level with all the biggies (currently we are ranking 154!). I don’t know what that will do to my blood pressure levels, which already sky rocketed marvelously with Brazil going into penalty shoot-out with Chile last Saturday in the Round of 16 – and Brazil is not even my country! And of course, I will cheer for India against Messi or Brazil or Italy- hoping against hope!

The newly conceived Indian Super League gives me the hope that may be in another decade (or maybe longer) we will be able to have a proper team of eleven talented players (which shouldn’t be too hard from a pool of over a billion people) who will play for the glory, the love of the game and be compensated for it too (something that primarily happened only to cricketers in our country). Of course, Kolkata was the most sought after team which is now owned in part by Sourav Ganguly (who interestingly was initially a footballer before he went on to become one of the best Indian cricket captains) and by Athletico Madrid. If I had known about this ownership, I’d have supported Athletico Madrid against Real Madrid in the Champions League Finals earlier this year! Anyway, it seems the Kolkata team is going to called Atlético de Kolkata. Funny but exciting! Of course, the other sought after teams are the states that are similarly enthusiastic about football, the North-East, Goa and Kerala. The remaining teams are Mumbai, Pune, Delhi and Bangalore, which makes it look like that the whole country might be gearing up for league football.

As for the ongoing FIFA World Cup, the Round of 16 just completed yesterday and the teams that are in the quarter finals are Brazil, Colombia, Netherlands, France, Germany, Costa Rica, Argentina and Belgium. None of them had it easy. Experience gave them an edge but they had to fight tooth and nail with the younger teams to earn (convincingly or no) their places in the quarters. So, today is an off day for football and I am already suffering from the withdrawal symptoms of adrenaline. Football is like having an addiction – it is not easy to juggle day-to-day life, work and the matches together, but not having the matches to look forward to is worse. But we are still in the middle of the season, and the tournament in not over yet. So, at least all the heated discussions, the angry conversations and the passionate arguments are still on!

I am rooting for Brazil, as usual, or at least a Brazil-Argentina final (or even a third place match)… Who are you rooting for?

N.B. For reference, look up a certain American columnist, Ann Coulter’s article on how American interest in soccer, moral decay, the metric system and true Americans (versus, immigrants) are inter-related. Pardon my reluctance to post the link here. ~G.

I am doing myself injustice and giving voice to stupidity, but still am posting the Ann Coulter link here, if for nothing but the laughs and the enjoyable discussion this article brings forth! ~G.

An Artist in Science: A Misfit 'cause I choose to be one. "Whenever you find that you are on the side of the majority, it is time to reform" And a Maverick, because, I'm... umm... brilliant?
View all posts by Guria →
This entry was posted in Calcutta and Bengali, Observer, Passions, Random, Reviews. Bookmark the permalink.

1 Response to Football: A Religion