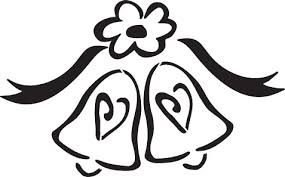 That’s me. Or us. The ones who left the country just about six months ago constitute this huge task-force whose very presence in the city or even country was all that was required to keep away the marital bliss several miles away.

It can’t just be the “marriageable” age that suddenly appeared unbeknown to everyone in just six months! When I was back at home, there wasn’t as much of a whiff of the word “Wedding!” or even the faintest tinkling of the bells, forget the clanging that eventually ensued.

My very first-cousin, whom I talk about often as the brother who made me a tomboy (sorry, but to me he’s my brother even though we have separate parents), who incidentally promised me last March that he’s definitely not getting married before he’s 35, for he’s still too young, got hitched two weeks back!

Three second cousins got married last December and this January. Given I was very close to two of them, I was heartily pissed and sulked the mornings in the USA which was the evenings in Calcutta when the weddings were taking place.

One of my oldest friends got engaged last December and has set the date for the wedding for this December. Of course, given the time, I won’t be attending. She was so busy with all the preparations, she didn’t even tell me since I wasn’t in the country anyway. I wasn’t sure whether I should be utterly pissed and renounce her or whether I should tell her, of course, yaar, we have been friends from when we were babies, no formalities with me.

And every body had to marry right now and just could not wait till the monsoon season when I’ll be in town!!

And to finish in haste the incomplete list, girls I went to school with, boys and girls my boyfriend went to school with, people we both went to college with, all are tying the knot, fast and furious, right, left and center!! Is the world really is going to end in 2012?!

The thing is I am scared of marriage, at least for now. I mean, I don’t know about age but isn’t it about maturity? And I’m famous for my immaturity even on this blog! (The blog that was created specifically to document all the great things about me!!) But am I so lagging behind in maturity that all the kids, yeah kids, younger to me in school, in college (I will damn well call them kids still), are getting hitched to The One (I mean, a different The One every time for each of them)?!

Why the hell should they all get married when it’s the time to enjoy being single, erm, unhitched? I really love my status, I am in love with the guy whom I eventually will be marrying and yet at the same time, am unhitched enjoying a responsibility-free romance. Well, that is the scary word – responsibility. Why in the world would I take that on my head when I can enjoy a few more years as a baby daughter (sadly, also as a ‘baby’ girlfriend) who doesn’t have to take decisions?

My boyfriend however told me, unlike us, strugglers in the world of research, they are all settled in their lives, their careers, have been earning for a while to think about taking the next step and can do it happily. But I’m am stubborn enough to emphatically disagree that it is more reason to enjoy being in love (buy anything and not worry about monthly bills) without getting married right away (go back home to your parents). Though, my boyfriend shook his head indulgently at my argument, I still hold that they should have held a couple of more years. It’s just that they didn’t speak to me first.

Or maybe I am just jealous of missing all the great food, dressing-up, happy times and the magic of  togetherness for forever. The bride in red, the glowing faces, the look in the groom’s eyes as he beholds his beautiful bride in that first glimpse, the clasped hands, the laughter, the joy, the families coming together – yeah, envy explains it better. It is beside the fact that I missed the people I love, my family and the weddings that I looked forward to from the beginning of time.

However there are still a few other people, in my life and T’s (so in ours) who said it by themselves (without prodding from me) who’ll never get married without us at the occasion, for the event wouldn’t just be possible. His cousin (she said, who’ll be there to hold me (in a Bengali ritual) when I am given away if not my brother), his best friend (he said, I’ll schedule it when both of you are in town, hopefully there’ll be a muhurat), my best friend (she says, are you nuts… no hope of getting married without you prodding me along), my favorite cousin (he said, I’m too young anyway, you’ll get married first… I so like him), they won’t take us off their list. Ever.

But then I took a major decision and devised a foolproof method to make sure that we are not taken off the list. For everyone who gets married now, without us, will be taken off the invitation list of our wedding. Whenever that happens.

An Artist in Science: A Misfit 'cause I choose to be one. "Whenever you find that you are on the side of the majority, it is time to reform" And a Maverick, because, I'm... umm... brilliant?
View all posts by Guria →
This entry was posted in Laughs, Observer, People and Relationships. Bookmark the permalink.

5 Responses to The Anti-Marriage Force