Posted on October 3, 2009 by Guria
This post was voted as the winner of Blog-a-Ton, the Blogging Marathon in its Third Edition in October 2009. To look at the final results, click on the award-badge below.

This post has been published by me as a part of the Blog-a-Ton 3; the third edition of the online marathon of Bloggers; where we decide and we write. To be part of the next edition, visit and start following Blog-a-Ton.

Dream? What dream? Indians don’t dream. We are too steeped in our selfish reality, trying to survive from one moment to the next, to even think about the luxury of dreaming.
I was walking slowly down the broken, wet road, wrinkling my nose at the garbage dump on the side of the road. That’s what the country is coming to. A broken road and a smelling dump.


Next I would have to jostle and shove, along with the others, if I wanted to get on the bus within the next hour. Then I would have to stand in a god-damned queue in the passport office, to wait for the manager to start harassing me. Then on to the market, where it is mandatory to look down, a practise. Not that you are forced to. But if you don’t, you may end up cracking your head, after all the markets are so clean. Do I know how to haggle or be shrewd, because if I don’t, I’ll be pauper just buying fruits and vegetables. If he even gets a whiff that I am a  foreign-based Indian, which I am sure he will, get more than a whiff that is, I will be stripped. After all people in India smell money from a long way off. But then, it is not an easy feat to rank a lowly 74 in the corruption index.
This is what India is. Self-serving, rude and uncivilized.
Suddenly a kid shot across my path breaking into my recriminations. I swore out loud, “Watch it, kid!”

“Arre, uncle, aapka mobile, gir gaya tha” [Uncle, your mobile, it had fallen out] The kid was dirty, wearing only an equally dirty shorts but grinning ear to ear. I stared. Mechanically I took out a five-rupee coin and pushed it into his palm. He ginned even more broadly, “Arre, Saab, bhagwan aapka bhala kare!” [May God bless you, Sir] And he ran away. Did that boy actually bless me?! A beggar-boy who returned the phone, fallen out of my pocket but blessed me as I gave him just a fiver? I shook my head, and smiled, “Ludicrous.”

I reached the bus-stop. The usual crowd, without any order, was there on the look-out for the bus, each man trying to get ahead of the other. I took my place after an elderly bespectacled lady. I missed the first bus, in the usual commotion, I hadn’t fought hard enough. I raged at no one in particular, “I needed to get on that bus! I am in hurry, damn it!” The old woman turned around, and peered at me over her glasses. I braced myself for the reprimand to come, I knew that look very well. I was not wrong. She croaked,” You in a hurry, so you should have said before! All young people are in a hurry! Why, I ask? To get old?” Her next words, however floored me, “Come on, you stand before me, I am not in a hurry.” Before I knew it, she was shoving me and another guy, a college-going kid by the looks of him, ahead of her.

The college-kid laughed, and struck up an instant conversation with the lady. The next bus came. I got on the bus and turned around to see whether the lady had been able to get on the bus, with all the jostling going on. She had. But only because that college-kid had waited to hold the pushy crowd at bay, while she did. Come to think of it, even the crowd looked less pushy. The kid got a seat for the lady in the ladies’ section and went to stand at the back of the bus. I stared back and forth between them. Rare species.

The passport office was just as to be expected. All commotion and no work. I checked the handwritten placards, and made my way to the correct table. The officer lounging in his chair, was chewing tobacco with a fellow chewer,  who was half-sitting on the table.

“Sir, my passport is being renewed, and I should have got it by now. What seems to be the problem?”, my irritation got better of me, when I knew a flattering approach works better in government offices.

The man on the table turned halfway to glare at me, chewing ferociously. But the man in the chair sat further back, if possible, in his chair, and laughed rudely, “Always in a hurry.” That made it twice in one day. “Can’t wait to leave, huh? It is not easy to get your passport the moment you want it, understand?” Then he looked at me from the corner of his eyes and said, “Of course, if there was some incentive…” He let it trail. I saw my chance to get back on the field. Without thinking, I pushed a five hundred rupee note, and lied blandly, “Yes Sir, I need my passport renewed as soon as possible, you see, my mother is ill and I have to take her abroad.” The second man sat up straight. Before the first man could take the money, he pushed the note back to me and said, “Tell me your name, I’ll see to it.”

My passport was promised to me in five business days, my hand was shaken all around the office, and that man clasped my hands in his and said, “Your mother will get better, son. Try not to worry. It is because we have sons like you that India is still one of the greatest countries of the world.” And he hugged me. For the first time in my adult life, I was ashamed. Of lying. Of cheating a corrupt official.

My day was not turning out well. In every step, my beliefs, my ideas were being challenged. No, my ordinary day was turning out everything but that. I did not know what to do when I reached the market. Maybe the vendors will turn out to be God too.

The vendor was closing down for lunch when I reached. He grumbled but acquiesced. I bought all that was in the list and paid more than I should have, because I was in no mood for bargaining. And because subconsciously I wanted to prove my notion of this country true. It was petty but satisfying. But some force had other plans in mind.

The vendor closed down after me, and we walked out together, when suddenly the vendor turned right. Towards the line of old men and women squatting on the footpath. “They are not beggars”, he told me, “But needy.” I was rooted to the spot, as I saw the vendor who fleeced me a few moments ago, distribute them rice and pulses. At the end of my tether, I snidely remarked, “Aap toh sab Bhagawan nikle.“[It seems you all are God] And he quipped, “Nahin, Sahab, hum sab Hindustani nikle.“[No, Sir, we are all Indians]

That was enough for me. I looked nowhere as I half-ran back. This is not my vision of India. Warmth, caring, human values. People, even abroad, take the absence of these for granted. Where were the selfish, rude and corrupt people? Where was the backward India? Today was not the Independence Day or Republic Day, where did all this trove of feelings come from? Had it all been there? Had I been the one blind all along?

I got back home in a trance. Baffled, at the end of my wits, I told Father all that had I had seen, done, leaving out nothing. “…It was as if, Dad, I was transported into some alternate universe.” My old man smiled and said, “Arre puttar [son], not alternate Universe, what you saw today is India, where resides the heart of Mankind.”

I was still reeling. I was having an epiphany here.


Economics, globalization, technology, education, developments one after the other, the India I knew, was behind so many. But I realize, it’s moving too, slowly may be, but it is moving. Today I saw why. The people. The people who may not have a lot, may not know a lot, but they convert it to a lot.


Population, corruption, lack of education, poverty, pushed back and trodden upon, India has lost much, forced to become selfish, but the ancient values are still there, dormant maybe but there, in each of us, somewhere. It is only in India that they think of the others. That people feel, that they look out for each other, even in this inconsiderate and self-seeking world. After this, what else can be too difficult? What we have to do is try. All we need to give is Time, and the effort, the effort of Indians like me. Because everything said and done, everything good, bad and ugly about India, we, Indians, not only have the head but the heart as well.


For the first time in my life I was proud of being an Indian. And it was time to give something back to the country.


I went back to my room and stared at the application of citizenship on my desk, before tearing it up.


Dream? What dream? We, Indians, don’t just dream. We can make every one of them come true. 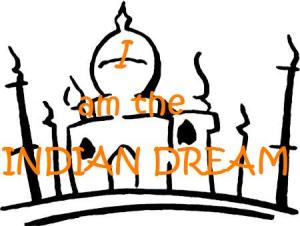 P.S. Inspired by a true story.

The fellow Blog-a-Tonics who took part in this Blog-a-Ton and links to their respective posts can be checked here. To be part of the next edition, visit and start following Blog-a-Ton.

An Artist in Science: A Misfit 'cause I choose to be one. "Whenever you find that you are on the side of the majority, it is time to reform" And a Maverick, because, I'm... umm... brilliant?
View all posts by Guria →
This entry was posted in BAT, Causes, Contests, India. Bookmark the permalink.

59 Responses to The Indian Dream